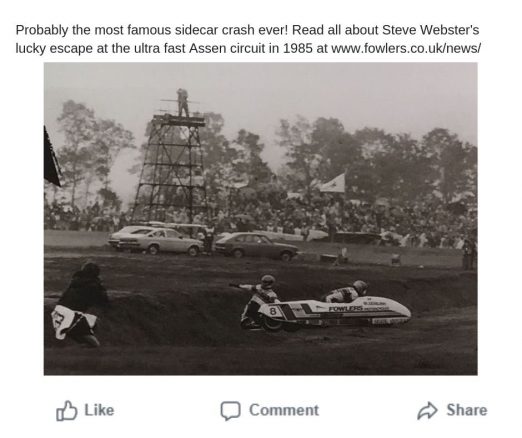 Steve Webster – the most successful sidecar racer in the world – has rescued and restored the outfit in which he had a lucky escape at the start of his international career, when he crashed heavily at the 1985 Dutch TT.

It’s one of the most-viewed sidecar crashes in history and you can see the footage here [https://youtu.be/q0xClP_frok]. Webster and passenger Steve Hewitt clip the kerb at high speed and slide along the grass infield, before hitting a drainage ditch and cartwheeling out the other side. Both were lucky to avoid serious injury, although they missed most of that season.

By the 1990s Steve was firmly established as one of Britain’s most successful competitors across motorsport. He was awarded an MBE in 1991, and in the same year received the Segrave Trophy for “Outstanding Skill, Courage and Initiative on Land, Water and in the Air”, joining a roll of honour that includes Geoff Duke, Donald Campbell, Barry Sheene and Jackie Stewart.

The restored outfit is an LCR-Yamaha, originally built in 1982, resplendent in Fowlers/Silkolene livery, and powered by a Yamaha TZ500 2-stroke motor, as used by Kenny Roberts in the late 1970s. Steve found the outfit rusting in a Kent garage, minus its motor and exhausts. Fortunately, he’d kept the original engine himself, so it was reunited with the chassis, although the bodywork was beyond repair, and a replica fairing had to be produced in Switzerland.

Now restored to its former glory, Steve can be seen driving it at events such as the Goodwood Festival of Speed.