Dave Ball, a Master Motorcycle Technician at Fowlers of Bristol, has won the 2016 Yamaha UK Tech Grand Prix (UKTGP) and will go on to r 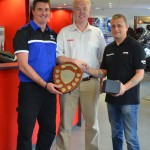 epresent the UK at European level.

To reach the UK final, Dave had to complete several online assessments before being invited to Yamaha UK’s head office in Surrey, where he competed with four other successful Yamaha technicians for the coveted award.

After a day of intense assessments, including a series of practical tests covering skills such as fault-finding, diagnostics and customer interaction, Dave was named the winner. Training Officer, James Fenton, and Country Manager, Lee Neesham, presented his award.

Dave has been with Fowlers of Bristol for 20 years and has previously been recognised for his technical skills, having won the Yamaha UK award 2007. He was also crowned Suzuki Motorcycle Technician of the Year in 2013.

A keen motorcyclist, Dave is still riding the XT660R that Yamaha gave him for a prize in 2007 – “It’s the ideal commuter bike for Bristol’s busy city streets”.

“I’d rather fix a broken bike than do the routine servicing jobs” says Dave. “You get a happy customer and that’s where the job satisfaction comes from”.

The UKTGP is part of a wider search for the world’s best Yamaha technician; Dave will go on to compete against the winners from other European countries in September at the European Tech Grand Prix (ETGP) in The Netherlands. The top three technicians from the ETGP will then be invited to the World Tech GP final at Yamaha Motor Co., Japan in October.