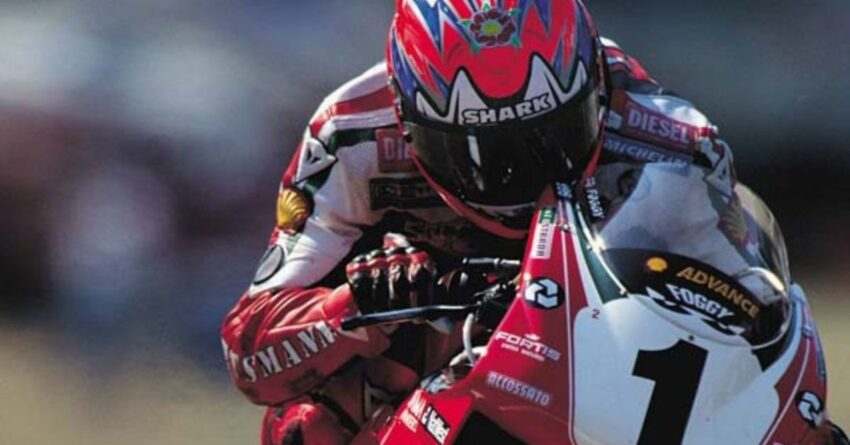 Remember the Nineties? It was all Britpop, Blair and, if you were into motorcycles, superbikes.

Honda launched the Fireblade in 1992, the same year that Suzuki introduced the water-cooled GSX-R750. Yamaha’s YZF750 came out the following year and Ducati unveiled the 916 in 1994.

As if all that wasn’t exciting enough, you could watch modified versions of these road bikes, (with the exception of the Fireblade – Honda fielded the 750cc RC45) being raced around some of the most glamorous circuits on the planet in the Superbike World Championship.

By the end of the decade, it had reached a climax. At a time when British riders were struggling in Grand Prix, Carl Fogarty had already won three superbike championships (1994, 1995 & 1998) and was truly an international sporting superstar. For the 1999 Championship, there would be not one, but two rounds in the UK – one at Donington Park (the “British” round) and an additional “European” event at Brands Hatch in August.

This was going to be too good to miss and, on a bright and clear summer Sunday morning, I met up with three of my local biking pals to make the 200-mile round trip to the Kent circuit. Nothing could have prepared us for the spectacle that awaited us.

Everything seemed like a normal ride to a race meeting at first, with a ‘spirited’ blast down the motorway and around the south side of the M25. Traffic suddenly slowed approaching the junction for Brands Hatch. Had there been an accident? Was it a tailback of trucks heading for the Channel ports? No, it was motorbikes. Hundreds of them, completely choking the slip road down to the roundabout. We crawled along for the final few miles to the track, a solid jam of hot motorcycles and even hotter riders, sweltering in their leathers.

On arrival we were shepherded into an overflow car park in a field a good 15 minute walk from the entrance and trudged down to the track to find a good spot to spectate. This was to prove challenging. Although Brands is nearly two-and-a-half miles long, it was rammed. People had ridden over from France, Germany and Holland, creating an international festival atmosphere. Eventually we settled at Druids, the hill giving us a slightly better view of the heads of all the people in front of us.

The racing was amazing. On the grid were Troy Corser, Frankie Chili, Colin Edwards, ‘Nitro’ Nori Haga and Aaron Slight, with Foggy on pole. When they came past on the sighting lap the crowd went berserk and it basically stayed that way throughout the entire race. Poor Fogarty had a nightmare, pulling off with tyre problems and rejoining to finish 19th, leaving his contender for the crown, Colin Edwards the ‘Texas Tornado’, to cross the line in first place.

Scorched by the sun we went in search of liquid refreshment. The queues for the mobile bars around the site were unbelievable, but all equally long. When we finally reached the front we ordered a dozen bottles of water. “Sorry mate, sold out”. OK, how about pop? “None left”. Lager? We wouldn’t be riding for a few hours yet and one pint of watered-down lager wouldn’t hurt, but it was the same story. What have you got? “Red wine”. We left, thirst unquenched, and decided to watch Race Two in the shade of the trees at Pilgrim’s Drop. It was every bit as exciting as the opener, with Foggy pushing as hard as he could for that elusive victory. Alas he had to settle for fourth, with Edwards taking the laurels again on the Honda.

Were we disappointed? Not a bit of it. The atmosphere had been electric and we’d witnessed some of the greatest racers of a generation push each other to the limit. By the time we’d slogged back to the car park there were only a handful of bikes and a solitary ice cream van. He’d sold out of cold cans but he still had some cider lollies, so we had two each and hoped the sugar rush might get us home.

We knew we’d experienced something special, but it wasn’t until we read Motorcycle News the following Wednesday that the full extent would be revealed. That weekend attracted the biggest crowd in the history of World Superbikes – 120,000 people.To put that in perspective, that is 50% more than that year’s FA Cup final at Wembley (Newcastle Utd v Manchester Utd, in case you were wondering).

The new millennium heralded change; Valentino Rossi moved up to the 500cc class in MotoGP and Foggy retired from racing after a serious crash at Phillip Island. Things would never be the same again and the pendulum of popularity swung away from WSBK and back to Grand Prix. But that’s another story …