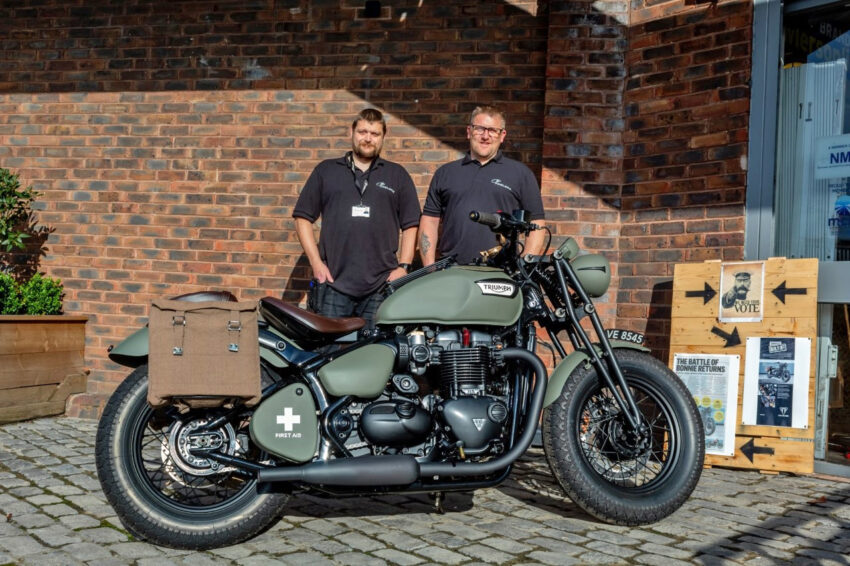 A custom bike, built by two Bristol motorcycle mechanics in their spare time, has been crowned Triumph’s Bonneville Build-Off 2020 winner.

Sam Upton and Tony Crocker – both Master Technicians at Fowlers Motorcycles in Bristol – created VE75, which commemorates the 75th anniversary of VE day, and was voted overall winner of the coveted award, beating nine other entries from Triumph dealerships across the UK.

Sam and Tony used British Army heritage as their inspiration, taking a 2020 Bonneville Bobber and giving it a distinct 1940s feel, paying homage to the original Triumph WD despatch riders’ machines that played a crucial role for the Allied effort.

The bike features military-style green paint, custom-made girder forks and wide handlebars, canvas saddlebags and a host of other period details, including a fully blacked-out engine and exhaust. Commemorative badges on the cases and clocks, as well as genuine WWII accessories, top off the look.

Sam and Tony explained: “With it being the 75th anniversary it seemed a fitting tribute. We all have relatives that have ties to WWII, so it can mean something to everybody.”

The build took around three months to complete, the pair working on the Bonneville during their lunch hour, between workshop jobs and in the evenings after work.

Everything apart from the engine and wiring loom was removed and replaced with a combination of genuine Triumph parts, bits and pieces found in the scrap pile and parts sourced from all over the World.

“The parts we couldn’t find or wanted to be that little bit special – the pannier racks, tank rack, bar ends, dust caps, modified exhausts, fuel cap dummy, steering damper, plus lots of other parts we have forgotten – we made ourselves.”

“We also had the period girder forks custom made for us. That was the most challenging part of the build, to be honest, getting the forks sorted. But once all the measurements were there it wasn’t too bad, and it was definitely worth the extra effort. It completes the look. It just wouldn’t have sat right with conventional forks.”

The competition, organised by Triumph Motorcycles, challenged nine of their official dealerships across the UK to create the best custom Bonneville 900 or 1200, using a combination of genuine accessories and their own in-house engineering skills.

Entries were submitted to a public vote for the Public Choice Award, as well as a panel of four judges, including: architect and television presenter George Clarke; Olympic gold medal-winning cyclist Victoria Pendleton; bespoke motorcycle designer and builder Jody Millhouse; and Devron Boulton, general manager of Triumph UK and Ireland.

Find out more about Bonneville Build-Off 2020, and see all the entries at www.triumphmotorcycles.co.uk/bonneville-build-off