Yamaha has teamed up with their top MotoGP stars Jorge Lorenzo and Ben Spies to give you the chance to win one of three limited edition WGP 50th Anniversary Yamaha bikes.

In 2011 Yamaha celebrated its 50th year in Grand Prix racing with a special red and white speedblock livery as used by the stars on track as they fought for MotoGP glory. To celebrate this incredible 50th anniversary landmark Yamaha created a limited number of bikes across the model range and three lucky winners from across Europe will now be able to own one of these should they complete the challenges correctly. You could be in with a chance of riding away on either a 50th Anniversary Yamaha YZF-R1, a 50th Anniversary Yamaha FZ8 or a 50th Anniversary Aerox scooter*.

Kicking off on 19th August and for European Facebook members only, Lorenzo and Spies have set six challenges for fans to complete, each of which will be revealed individually at 16.00 CET every Sunday of the next six MotoGP races, starting with Indianapolis. You will have until the 28th October to complete all six challenges so don’t panic if you don’t get a chance to start right away! All the details of the competition and how to get started will be revealed on the European Yamaha Racing facebook page, www.facebook.com/yamaharacingcom, or if you want to go directly to the campaign, head over to challenge.yamaha-motor.eu to register and get ready! There’s also a cool video featuring both Jorge and Ben and the bikes you could win, so what are you waiting for? 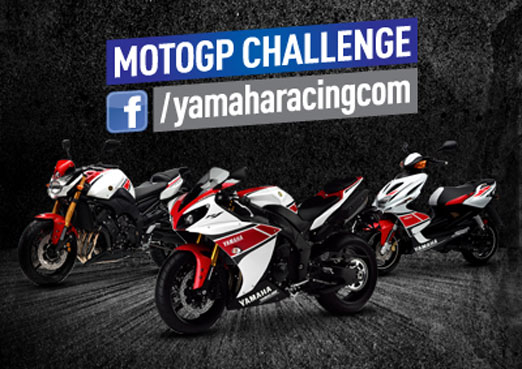 “We hope you have as much fun completing the challenges as we did making the video!” said Jorge Lorenzo. “It was cool hanging out at the Yamaha Dealership where we shot the film and getting to play with all the great products and bikes they have there, a real treat! We all thought the red and white colour scheme was really special and it was amazing to be part of the 50th Anniversary last year. You have to enter the competition to try and win one of the bikes so you can be part of it too!”

“The 50th Anniversary red and white livery is my all-time favourite colour scheme,” said Ben Spies. “It brought me a lot of good luck last year and some pretty impressive MotoGP results! Take on our challenges and see if you can be lucky too!”

*Terms & conditions apply, please see challenge.yamaha-motor.eu for more details. You must be registered on Facebook to take part in the competition.