Hot on the heels of being named the ‘Best Multi-Franchise Dealer in South West England’ by Motorcycle News, Fowlers has now won the Suzuki Small Bike Dealer of the Year award 2015, too.

Sales of motorcycles and scooters between 51 – 125cc have risen by 14.5% this year, as more and more commuters look for congestion-busting solutions to the UK’s gridlocked towns and cities. Smaller capacity machines now account for almost two out of every five new bike registrations and Fowlers has been particularly successful with the new Suzuki Address 110 scooter, selling more than any other dealer in the UK by quite some margin. 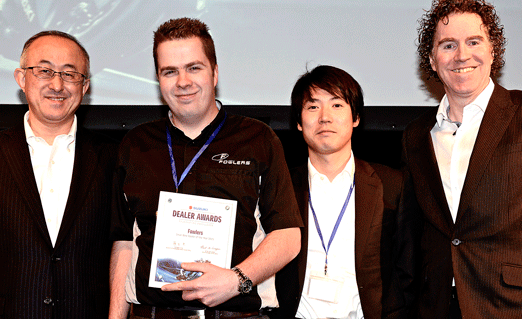 The judges identified that the dedicated Scooter/Commuter department at Fowlers made a significant contribution to its success, providing customers with a unique space to browse the wide choice of practical machines available.

Bristol commuters move more slowly at peak times than in any other city, including London, according to the Department for Transport. Suzuki’s light and compact Address 110 scooter is ideally suited to weaving through congested streets and parking in the tightest of spaces. And with 145 mpg, it’s as easy on your wallet as it is to the environment.

Fowlers stocks the full range of Suzuki motorcycles, from the 110cc Address to the 1800cc Intruder, and low cost finance is available on many models, including the Address, until 31st March 2016. For full details and a representative example, visit www.fowlerssuzuki.co.uk or come in and talk to us – we’re open seven days a week and situated conveniently on Bristol’s A38 inner ring road and within a 5-minute walk from Temple Meads mainline railway station.