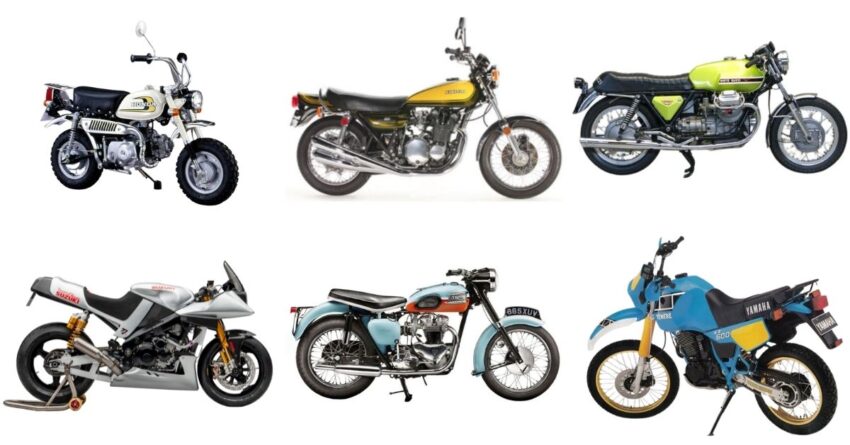 Then: Concerned about the ‘universal Japanese motorcycles’ image of their bikes in the late 1970s, Suzuki hired ex-chief of styling for BMW, Hans Muth, to give their range a more modern ‘European’ look. What Muth and his team came up with was the Katana. Though it might look a little tame to modern eyes, it’s angular, futuristic, robot shark-like styling was nothing short of revolutionary, and the 1100 version had the numbers to back it up: 1075cc, 111bhp, 71ftlb of torque. The big Kat’s styling laid the template for Suzuki’s range (and others too) throughout the 80s and beyond, and elements like the faired-in side panels and tank and short seat can still be seen on bikes today.

Now: The new Katana gives more than a nod to its predecessor, both in style and performance. The unmistakably Katana bodywork – as angular and aggressive as the original, but with a contemporary twist – sits atop a thoroughly modern supernaked. Its 999cc inline-four engine comes from the GSX-R1000K5 and puts out an impressive 148bhp. All that’s kept in line with a twin-spar aluminium alloy frame, fully adjustable KYB forks, Brembo radial brakes and four-stage traction control.

Then: The original Honda Z-series was made as a children’s ride at a Japanese amusement park. No, really it was. In 1961 Honda opened Tama Tech Park in Hino, Japan with motor vehicle attractions for the public to ride. One of those was a 49cc Super Cub engine stuffed into a tiny little frame with no suspension and five-inch wheels. Predictably, adults rode them just as much as the kids (it was dubbed the ‘monkey’ as that’s what people looked like whilst riding it: elbows and knees out), and so seizing on an opportunity, Honda started to produce road-going versions. As well as leisure bikes for motorhomers etc. they found favour with commuters too – the seat and bars folded, so it could fit in a car boot – and would remain (in various guises and engine sizes) in the Honda range for decades to come.

Now: Roll right up to date and the 2022 Monkey doesn’t mess around. Chromed high-rise handlebars, plus frame, swingarm and shock absorbers painted the same colour as the peanut fuel tank – and the high-level mudguards – all pay homage to the original, as do the chunky block-section tyres. Underneath it has a fuel injected, 125cc engine and 5-speed gearbox; proper USD forks and twin shock rear suspension; full LED lighting and IMU-controlled ABS braking. It also still has bucket loads of character.

Then: Arguably the world’s first real superbike, when the Z1 hit the streets in 1972 it was the most powerful Japanese four-cylinder, four-stroke motorcycle ever offered for sale to the public. It’s 903cc, 85bhp motor was enough to propel it north of 130mph – though the chassis and brakes weren’t quite up to the job of keeping it in check. It was also the first time an affordable four-cylinder motorcycle had been offered for sale with double overhead cams. The Z1 raised the bar higher than it had ever been, ushering in a new era of big Japanese multis and setting the template not just for Kawasaki, but for many other manufacturers, too.

Now: Kawasaki have done a cracking job with the new Z900RS. Putting it simply, they took the current Z900 – already a great bike to begin with – then wrapped it up in exquisite, authentic seventies styling. The build quality and attention to detail is impressive – they even designed a new subframe so the seat sits flat like the original Zed. It’s also a masterpiece on the road, with more than enough power and performance for experienced riders to enjoy, yet non-threatening, compliant and really easy to control – unlike the old Zed! – for newer riders.

Then: The original Ténéré was inspired by the Paris-Dakar racers, campaigned to victory by Cyril Neveu and Yamaha Motor France in 1979 and ’80. Basically – and the word was basic – they were an XT550 single with a bored-out engine, rally-style 30-litre fuel tank and race colours.
Though basic, it certainly proved itself on the Dakar and it sold well – particularly in France. Gradually the Ténéré grew in capacity and acquired things like electric starting, but the ethos of a small-ish, lightweight-ish, simple, uncompromising rally bike stayed, and as such it remained the choice of many serious overlanders.

Now: The latest generation Tenere has a high-torque 689cc twin-cylinder engine equipped with optimised transmission for the perfect balance of power and control. The compact tubular chassis and slim bodywork offer maximum agility during stand up or sit down riding – and race-bred front suspension, switchable ABS and spoked wheels can take you anywhere you care to go. In a sea of large capacity adventure bikes tailored largely for on-road use, the Tenere is a refreshing change – and has, even today, stuck to its original ethos.
Want even more nostalgia? It even comes in a Rally Edition with blue/yellow racing livery, speedblock graphics and gold rims – a tribute to the original factory bikes.

Then: Fewer names in motorcycling can claim to be quite as iconic as the Bonneville. The legend was forged in 1955, when Johnny Allen rode his Triumph-powered ‘Texas Cee-Gar‘ streamliner to 193.30mph on the Bonneville Salt Flats, setting the record for the world’s fastest motorcycle. NSU took the title briefly, but Allen took it back in 1956 at 214.17 mph, a record that would stand until 1962. Edward Turner wasted no time in cashing in, proclaiming Triumphs as “The world’s fastest motorcycles”. He would cash in further in 1959, releasing the Triumph Bonneville 650 – designated the T120 for it’s claimed top speed. At the time, the T120 really was the fastest bike you could buy, nothing else could touch them.

Now: The modern day T120 is almost double the capacity of the original, with a liquid-cooled, eight valve, SOHC, 1200cc engine at its heart. Start it up though and it still sounds like a Bonneville, thanks to the 270° crank – and it also looks like one, with drop-dead gorgeous styling incorporating the original’s distinctive features: deep, two tone paint, chrome multi-piece Triumph tank badges and peashooter style silencers, at a glance it’s indistinguishable from the predecessor. Underneath those classic looks is thoroughly modern performance and capability, bags of torque, a stable and responsive chassis and tons of grin factor; a genuine icon, beautifully evolved.

Then: The V7 Sport is where the legend of big, fast Guzzi V-twins began. Although they’d enjoyed tremendous success with their singles, both on and off the racing circuits, by the late 1950s they were struggling; that was until experienced engineer Lino Tonti took their 700cc transverse V-Twin engine, upped the capacity and designed a low, light slimline frame for it to sit in.
Essentially a factory racer on the road, the V7 Sport was fast, agile, characterful and went down a storm with press and punters alike. It would prove too expensive to sell in big numbers though and would have a very short life – it was discontinued in 1974 – but it instantly established Guzzi as a maker of high-class, high quality superbikes, and laid the foundations for the years to come.

Now: Equipped with the same 853cc, 65bhp, 73Nm V-twin power plant found in the V85TT, the latest V7 definitely doesn’t scrimp on performance – neither does it give any character or feel away, it’s still every inch a Mandello twin. The ultra-modern chassis keeps everything in check, making it simple to ride whether bobbing around town or bend-swinging through open countryside, and of course everytime you stop those authentic V7 looks will almost certainly gather a crowd of admirers.