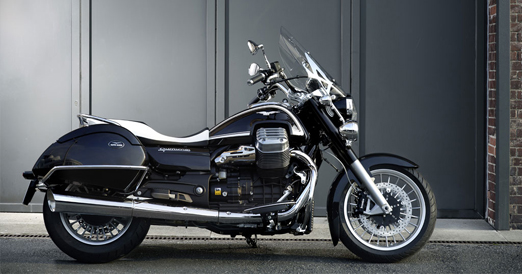 YOU DON’T CHANGE A WINNING IDENTITY

Sense of adventure and luxury, in perfectly balanced harmony. These essential characteristics allow boundless horizons to be faced with bold spirit and maximum comfort. The technical solutions, the new mechanical components and the innovative but faithful design make the California 1400 Touring the flagship of Gran Turismo. Pure reference for the entire category.

The Touring is the California in its most classic expression, destined for great travellers, thanks to a level of comfort, aerodynamic protection and load capacity which only a Moto Guzzi can offer.

Sumptuously equipped with “Patrol” windscreen, supplementary chrome-plated headlights, 35 litre panniers, engine and pannier guard kit, the Touring is a lavishly chromed and technological “tourer” which, powered by the largest V-twin ever seen before in Europe, is able to trot along all day with a thrilling sound and, if necessary, provide a taurine thrust able to leave behind any vehicle on two or four wheels.

The sensory indulgence continues also with the engine off, outside your favourite bar or in your garage at home, where you can explore it in its smallest detail. Here there is plenty of choice, including engine and construction details or technological devices: among these, for the first time in its category, the possibility to choose the preferred engine response between Turismo,Veloce, Pioggia modes, or select the cruise control which, together with the anti-theft device, is part of the standard equipment.

But the sumptuous standard equipment does not preclude the possibility of further customising the motorbike according to one’s own taste and needs: the accessories catalogue is the most comprehensive ever produced by Moto Guzzi.

High performance silencers, chrome-plated and machined components, saddles of all types and materials, as well as support and the App which turns an iPhone into a supplementary dashboard to obtain all kinds of navigation, performance and technical data information.

Special attention has been given to the chromatic concept, developed in two colours: white with dark decorative threads on the tank, inspired by the California Highway Patrol versions, or classic black with white threads, reminiscent of the original versions, such as the V7 and 850 California.

On a California 1400 Custom one becomes a traveller even for small trips. A vocation which provides every driving moment with overwhelming intensity: the combination of power and pleasure. The custom soul comes out in the ride by wire technology and cruise control system for selecting engine power curves and character. Nothing is left to chance.

The Moto Guzzi is the “bad” sister of the Touring, in total contrast in terms of temperament, style and vocation.

It conquers the rider with the strength expressed by its unique cruiser design, hard and pure: two wheels, an engine, saddle and handlebars.  All made with the rigour of form and function, combined with a typically Italian aesthetic sense, expression of attention to detail and execution ability worthy of the best interpretations Madein Italy has ever produced in the automotive field.

This can be seen in the details, such as the two-seater saddle boasting the hot-pressed Eagle logo, the drag bar handlebars with light-weight supports and the original rear shock absorbers with external tank. To increase the expressive power of the design is also the minimal graphics based on textured colours such as mercury grey and basalt black and certain skilful touches of style, such as the black lacquered wheels with red Moto Guzzi logo and black wing mirrors.

Once in the saddle, the differences compared to the Touring forcefully emerge: the new sport saddle and drag bar handlebars provide a low slung and backward sitting position over the rear wheel for perfect metropolitan showing off. One travels enveloped in the sound of the 1380 cc big bore, ready to unleash 120 Nm at 2750 rpm or cruise in overdrive, at little more than idling, trying to listen to the beats of the 104 mm pistons of the mighty 90° V-Twin madein Mandello del Lario, filtered by the innovative elasto-kinematic fixing to the tubular frame.

The deliberately minimalist appearance of the design further enhances the presence of technological features not found in any other motorbike manufactured by competitors. The California Custom, like its sister traveller, has cruise control as standard, with MGCT traction control which can be set at three levels of intervention and, thanks to RidebyWire, it is also possible to adjust the engine response according to three modes, Turismo, Veloce and Pioggia, respectively.

And if the “rider“ of the California Custom can choose the character of his motorbike according to the type of route and use, he can also adapt it to his personality, drawing on the most extensive accessories catalogue ever produced by Moto Guzzi.

To find out more about the new Moto Guzzi California, visit the California micro-site here.