Why are motorcycles only allowed in some bus lanes? 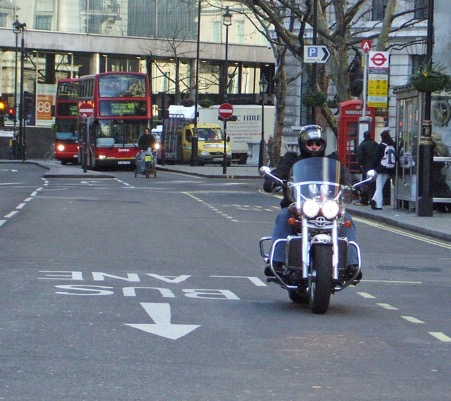 Picture a situation in which the rules of the road varied from city to city. Imagine if, in Leeds, vehicles already on a roundabout must give way to traffic joining it; or in Lincoln, you’re allowed to park on double yellow lines for up to 30 minutes and in Leicester you may ignore no entry signs after 6pm.

For Britain’s 1.26 million motorcyclists, this mayhem is reality.

Bikers in Bath, Bristol and Belfast can use bus lanes. In some parts of London riders have access to bus lanes, which then changes when they cross an invisible border into the next borough. Motorbikes are not permitted to use any bus lanes in Oxford or Cambridge.

You’re probably wondering how this confusing state of affairs was allowed to evolve. The answer is that the Highways England is only responsible for motorways and major A-roads. All other routes are controlled by local authorities, and they all have different views about motorcycles.

Some, like Northamptonshire, embrace powered two wheelers as part of the solution to their congested roads. Others see any private transport with an internal combustion engine as a major threat to the environment that should be discouraged (or, better still, banned).

So far, every council that has run a pilot scheme, to test the effects of bikes in bus lanes, found no significant problems and allowed access. You won’t be surprised to learn that authorities which refuse to permit motorcycle use of bus lanes also refuse to run pilot schemes. It’s almost as if they’re afraid that they might not get the results they want.

If you can’t use bus lanes in your area, you might want to bend your local councillor’s ear, or even arrange a meeting with your MP. And if you need some facts and figures to back up this common sense proposal, the Motorcycle Action Group (MAG) has published an excellent report on “PTW access to bus lanes” which you can read at https://wiki.mag-uk.org/images/8/89/2018_10_25_PTW_Access_to_Bus_Lanes.pdf.

2 thoughts on “Life in the bus lane”