To my old fashioned eyes the KTM690 duke is a strange looking beast, like some sort of weird insect poised to strike – an angular confection of KTM’s signature orange, black and white colour scheme.

I wasn’t sure how I would find it when Rod suggested I take the Fowlers demonstrator over to the Isle of Man for the Manx Grand Prix.

The bike caused a predictable stir and much hilarity wherever I parked it, “Mate! They said, looking at the large “Demonstrator” graphics, “did you tell ‘em you was just taking it out for an hour or two?” It also prompted some shocking confessions, one bloke told me he’d borrowed a demonstrator and taken it straight our on a track day, very bad man.

The Manx, or the “Isle of Man festival of Motorcycling” as they now want to call it, is very much a classic bike fest. Usually I would take over one of my old bangers and spend a happy morning, (that’s every morning), fettling the old croc in order to get a ride in after lunch.  In the company of friends Angus and “Old fashioned Tom”, this is actually a very enjoyable way to pass the time. I rather doubted if the KTM would need much spannering so I was going to miss out. 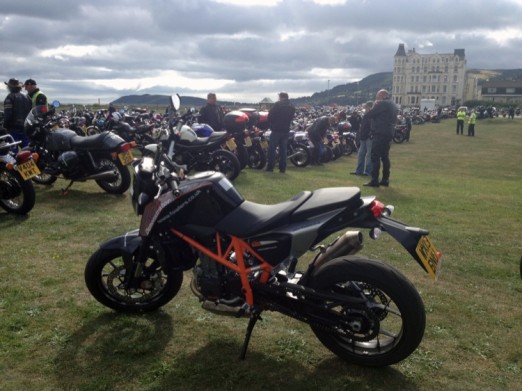 I had thought of comparing the KTM with Old fashioned Tom’s bike, a 1953 Vincent Commet – a 500 cc single bored out to 560cc. Ok its 50 years older but it’s a large capacity single with a monoshock rear end, slightly sporting (in the state of tune O.F. tom has it) and superbly put together. The first ride on the KTM rendered all thoughts of comparison redundant. Its chalk and cheese.

Despite Rod’s assurances I couldn’t help wondering if a 690 cc single would be fast enough for a bit of fun around the TT course, especially up “the mountain” where there are no speed limits, the road surface is superband one glorious bend follows another in one long unfolding slice of bikers heaven.

Also, looking at the bike, would the high wide front end start to flap about when pushed hard into corners? Would it vibrate like a jackhammer and be horrendously uncomfy at speed?

Well, none of the above.

The KTM690 was a complete revelation to someone like me who was brought up on old British singles. I simply don’t understand how KTM have managed to get a 690 cc single to perform as it does. This bike is fast, no, really fast – just when I thought it would start to run out of puff – say 75 it simply accelerated harder and harder – effortlessly passing the ton. Frankly I wouldn’t have wanted to go much faster with “open roads” (i.e. two way traffic). Though I have to confess I got mullered by a bloke on a grubby brown Kawasaki around windy corner, who were you? Respect whoever you are, your fast. 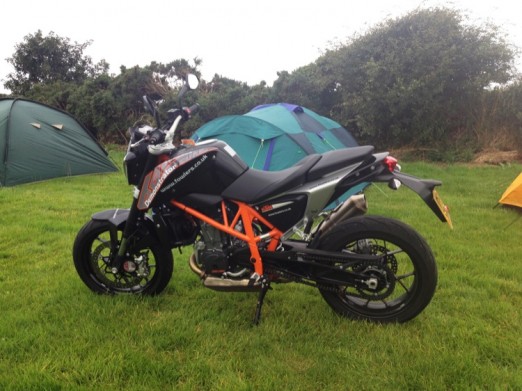 Handling? The Duke could be barreled into my favorite corners at high speed (80+) without any problems. Despite the semi “adventure” look of the front end it never waggled once – even on the fastest corners it felt wonderfully planted without a single complaint from the front end.

As you go into a corner the remarkably comfy seat simply “digs in” in a most delightful fashion – settling down into the corner – the whole thing is tremendously confidence inspiring.

Due to a massive cock up on my part I had to come home early and thus miss a lift home to Bristol in the Van. This meant I had to ride the little KTM through the night from Heysham (one of my least favorite journeys). How would the bike perform 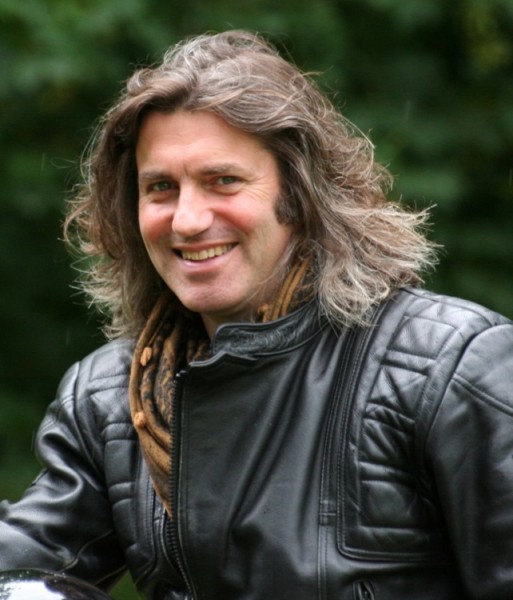 as a “tourer”? Answer – astonishingly well. We settled down to a comfortable Motorway speed, I wasn’t sure what to dial in, 70, 80, 90? Whichever I chose the Duke obliged. The balance shafts work so well it’s hard to judge if and when the big single is feeling stressed.

I arrived home even more impressed with the orange insect than I had been on the Isle of Man. Inevitably, it has now joined my ‘I want’ list!

All in all, an extraordinary “little” bike.

Now, I wonder if the KTM390 is almost as much fun?