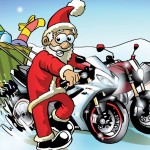 Santas on a Bike are meeting at Harry’s Café at 9am on Sunday 21st June. We’re not normally open at that time, but we’ve made an effort because it’s in a good cause. Everyone is welcome, providing they’re wearing Santa/reindeer/elf outfits and their bikes are decorated in a Christmas style. After a hearty breakfast the group will follow a pre-planned route to Little Bridge Hospice, just outside Barnstaple, where they’ll meet other riders from Exeter & Plymouth.

As this event is happening in the middle of summer, it should raise a few eyebrows and hopefully even more money. It could also raise a smile at the thought of Santa giving up his holiday to come and see these children early.

All attending are asked to make donations at the hospice and the group will be raising as much as they can on route.

To find out more, visit http://uk.virginmoneygiving.com/team/summersantarun. We look forward to seeing all you Santas (and little helpers) on Sunday 21st June.