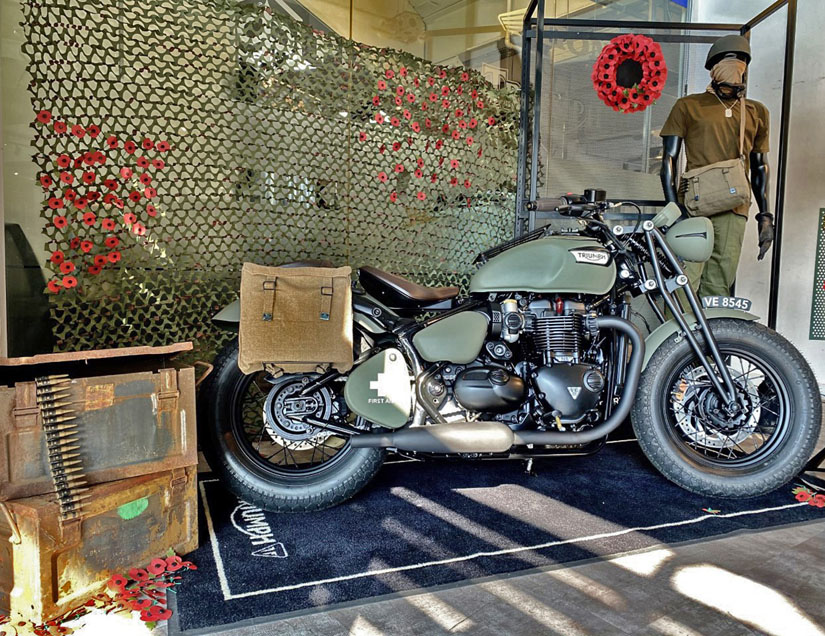 Public voting for the best bike in Triumph’s all-new Bonneville Build-Off Challenge for 2020 is now open and Fowlers is asking for the support of the community and fans to vote for their striking entry at www.triumphmotorcycles.co.uk/bonneville-build-off/fowlers

The team has worked together to design, personalise and build their beautiful bespoke Bonneville VE DAY to perfection, entering themselves into the line-up of this year’s national competition alongside eight competitor dealerships. The bike will be on display at Fowlers’ Bristol showrooms until 11 October.

Tony Crocker and Sam Upton, the master technicians behind this creation, explain:

“We have created a completely unique look for this modern classic bike, using a combination of exceptional engineering skills and genuine Triumph accessories. We used British army heritage as the inspiration for the build. Seamlessly combining a modern bike with a heritage feel, we used girder forks, canvas bags and big bars to pay homage to a past time. Army issue green was the clear colour choice for this beautifully crafted bike. The team also fully blacked out the engine and exhaust and added bullet hero bar ends. The addition of commemorative badges on the cases and clocks with genuine WW2 accessories completed this glorious tribute to a time gone by”.

“We’re representing bikers and fans across the Southwest, and would really value everyone’s support in helping our custom-built Bonneville to be crowned the winner this year. Voting closes at 9am on Wednesday 14 October.”

The build that receives the most votes via the build-off website will be crowned this year’s Bonneville Build-Off winner. Triumph is also bringing together four passionate and inspiring ambassadors to announce the winner of the public vote and present their own distinctive award.

The winners will be revealed on the 28 October via Triumph UK’s social media channels.