If you’re on two wheels you can use most of the bus lanes in Bristol, part of a trial originally started in 1996. Bristol was one of the first to experiment with the idea, which is now being adopted by other cities throughout the UK.

Bristol boasts the world’s biggest manufacturer of hot air balloons, which are one of the modern symbols of Bristol. Cameron Balloons in Bedminster makes more than anyone else in the world. Bristol even has its own International Balloon Fiesta, which many local fans feel is best watched from the Avon Gorge hotel’s patio bar rather than up close and personal in Ashton Court!

Ribena was invented in Long Ashton. Loved by all (except maybe dentists), this traditionally blackcurrant-flavoured drink was invented by a Bristol University scientist in 1933 at the National Fruit and Cider Institute, and quickly gained popularity during the second world war as an alternative source of vitamin C.

Born in Bristol in 1680, Blackbeard, aka Edward Teach, is famed as the world’s most notorious pirate. Believed to be the inspiration for Treasure Island’s Long John Silver, Blackbeard had a hide-out in Redcliffe caves, and the home of his birth still stands on the harbourside.

The Nails outside the Exchange on Corn Street is said to be the where the phrase ‘paying on the nail’ and ‘cash on the nail’ originated from. The bronze nails, with their flat tops and raised edges that prevent coins from tumbling onto the pavement, were made as convenient tables at which merchants could carry out their business. The oldest pillar is undated, but experts say it is late Elizabethan. The second oldest was given by Bristol merchant Robert Kitchen who died in 1594. The two remaining nails are dated 1625 and 1631. The Exchange building behind the Nails is the only surviving 18th century building of its type in England and now houses St. Nicholas Market a very successful indoor market selling great food and other wares.

Made famous in ‘Only Fools and Horses’, Mandela House stands behind Ashton Gate. The fictional Peckham estate is, in fact, in the south of Bristol. Much of the filming for the series took place in and around Bristol, and the renowned Batman & Robin scene was filmed in Broadmead.

The first bungee jump took place from the Suspension Bridge. On 1st April 1979 (this was no mere April Fools jape!), a member of Oxford University’s ‘Dangerous Sports Club’ bungee-jumped from the Clifton Suspension Bridge and a new sport was born around the world.

The prolific and international street artist Banksy hails from Bristol where several pieces of his work are still visible today, Originating from Kingswood but remaining anonymous he has had numerous successful exhibitions throughout the world including L.A, New York and of course the Bristol Museum which saw very long queues every day of the exhibit.

Wallace & Gromit were created by Bristol-based Oscar-winning Aardman Animations, whose main man is Nick Park. He acknowledges the debt the lovable Plasticine duo owe to the city and believes a lot of the humour has come from Aardman being rooted in the Bristol area.

Some ride-out info has been included, which Fowlers’ RAT club has recently completed over this Summer. The basic route notes have been converted into Google map routes to make it easier – just use the links below. 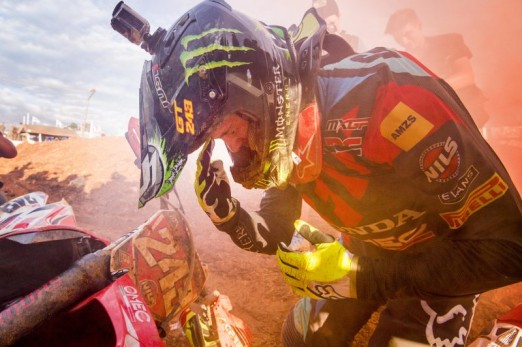 Now, remarkably, less than a year on, GT243 has done the double and taken his first MXGP crown in dominant fashion. Whereas he clinched the MX2 title in the last round of the season, before his 19th year was run Gajser sealed the MXGP crown with three motos remaining, underlying the powerhouse he has been in his maiden season aboard the Honda CRF450RW.

In taking his back-to-back MXGP title, Gajser becomes the first big-class World Champion for Honda in 16 years, since Fred Bolley triumphed in 2000. He joins an elite of nine riders who have claimed back-to-back motocross world titles on Honda machinery, and an even more elite group of those who have graduated to a bigger class and still been victorious in consecutive years (those in bold).

Gajser becomes Honda’s second-youngest big-class World Champion, just behind Greg Albertyn who won the 250cc category in 1993. Although they were both 19, Albertyn was just 61 days younger.

How old were they when they took their first title?

It’s hard to believe that Gajser’s MXGP crown comes just ten years after he started leaving his mark on the sport with the 65cc European Championship title in 2007, at the tender age of just ten.

A history of Tim’s Championship titles:

Since the end of 2013 when GT243 was picked up by Honda and Giacomo Gariboldi’s eponymous outfit, the resurgence of Gajser since has been meteoric. His flamboyant style mixed with his otherworldly ability to scrub has won him fans and fame across the world, from his native Slovenia where he’s a national celebrity, to the USA where they can’t wait to see him to do a ‘JMB’ and take his exceptional talent to supercross and the Monster Energy Cup.

Tim Gajser, the Honda CRF450RW and the Gariboldi Honda Racing team have blazed a dominant trail in MXGP after this season. 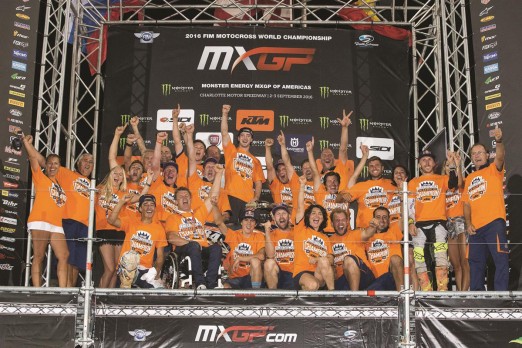 Jeffrey Herlings went on to take third in race two behind US national champion Cooper Webb, which gave the overall win to Webb. American Austin Forkner was overall third.

On his way to the title, Herlings won the first twelve rounds on his KTM 250 SX-F, dropping only three possible points with a second place in the opening moto in Italy. He then sat out three rounds (Czech Republic, Belgium and Switzerland) to heal a broken collarbone. He bounced back at the next round at home in Assen for another GP win, and on the start of race one at Charlotte he knew he only had to finish in front of closest rival Jeremy Seewer to take the title.

Herlings: “I am super, super happy, especially after everything we’ve been going through with a broken femur, a dislocated hip, two broken collarbones and almost losing my little finger. It’s number three and hopefully many more to come. The two strongest guys from America Webb and Forkner were here. Webb is the national champion and I beat him straight up in the first race and then he beat me in the second. I think the competition is stronger in the US, but we won the championship and that’s what it’s all about. I like the track at Glen Helen and it should be better than this track. Like always, we will do our best to make it happen.”

Herlings two MX2 factory teammates Pauls Jonass and Davy Pootjes are both recovering from injury were not with the team in the USA. It was a tough two races for the fourth member, 15 year old Jorge Prado of Spain, new to the MX2 factory lineup, and who took a podium third last week in Assen. He finished 19th overall with a 17-19 moto result.

The races at the man-made track in Charlotte were difficult for several reasons for the European riders. Qualification was washed out completely on Friday and they only had a free practice and a timed practice to learn the circuit. Added to this, the races were on Saturday night under lights. For riders and teams struggling to adjust to a six-hour time difference, this meant opening motos were run at 23.00 and midnight, and the second motos at 02.00 and 03.10 hours Central European Time.

Joël Smets (Motocross Sport Director): “You could feel the tension in the whole team in the last two GPs because what has happened in the past, so it’s quite normal that everyone is very emotional when the title in finally in the pocket. Regarding Jorge, we were all hopeful after Assen but we didn’t expect a podium. His own goal was to finish top ten. We do have to be realistic because he’s only 15 and we can’t expect miracles. Our boys are all talented and overall we have a good package, and for next weekend in Glen Helen we expect Jeffrey to do well and Jorge to improve.”