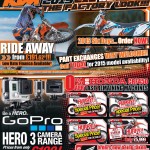 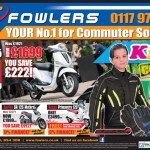 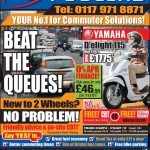 Fowlers took part in the recent Bristol Commuter Challenge, organised by the Motorcycle Industry Association (MCI) in the run-up to Ride to Work Day. RTWD is an international event when motorcyclists around the world come together to show just how enjoyable their daily commute is.

Commuter City Challenges were held in six cities around the UK to see whether a motorcycle, car or public transport is the quickest way to get to work. Representative commuter routes were chosen and the challenges carried out during peak morning rush hour. In every case, the motorcycle arrived first.

The 2014 TomTom Traffic Index reveals that traffic congestion in UK cities significantly worsened in 2013, with average journeys taking 27 per cent longer than they would in free-flowing traffic. The time lost as a result of traffic congestion is estimated to cost the UK economy £2 billion a year, and that figure is set to rise as the Government has forecast four million more drivers on UK roads by 2030.

TomTom list the 10 most congested cities as Belfast, London, Edinburgh, Bristol, Brighton/Hove, Manchester, Leeds/Bradford, Sheffield, Liverpool and Nottingham. Bristol is identified as the 4th most congested city in the UK, with journeys taking 32% longer on average than they would in free-flowing traffic conditions and 67% longer during peak periods.

The Bristol City Challenge started at 08.14 am in Nailsea, 10 miles from the destination at Harbourside in the city centre. The motorcycle arrived first after just 24 minutes, with the car driver arriving next, having taken 33 minutes, on a day when traffic was exceptionally light. Last to arrive was the public transport passenger, taking 44 minutes to complete the journey using the Long Ashton Park & Ride.

The challenge was supported by Fowlers of Bristol, whose press officer, Dan, rode a Kawasaki Versys 650cc motorcycle. Tom, a Financial Services Manager who works in the city centre, volunteered to be the car driver and independent timekeeper, while Shirley, RTWD Project Manager, travelled in by public transport. Bikes are allowed to use bus lanes in Bristol, which reduces journey times and helps riders to bypass gridlocked cars.

In three out of the six challenges, the car took the longest time to reach the destination, frequently being held up in traffic or finding it difficult to park, while the motorcyclist arrived first in all cases.

If you’re tempted to switch from four wheels to two for your daily commute, you’ll find a huge selection of new and used motorcycles and scooters in Fowlers showroom, close to Temple Meads station, with dedicated advisors in the scooter/commuter section, both of whom ride to work. 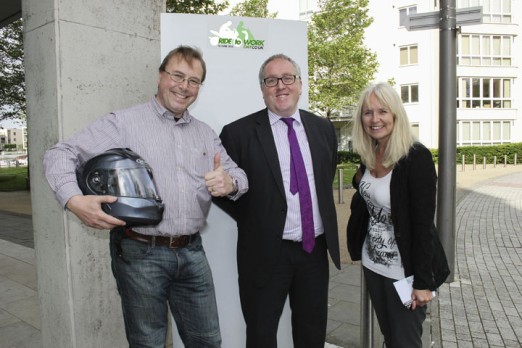 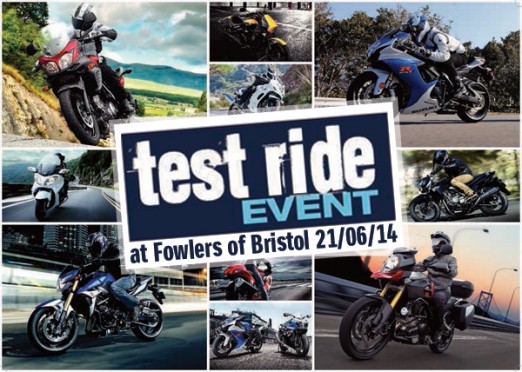 Pencil in Saturday 21st June as Suzuki will be arriving here at Fowlers for their annual test ride event.

Put Suzuki through their paces, as they will be bringing a wide selection of motorcycles for you to test ride from Fowlers.
You can ride a V-Strom, Inazuma, any GSX, GSR Street, Burgman, Intruder or the all-powerful Hayabusa.
Places are limited so book early to avoid disappointment.

Limited spaces are available and will be allocated on a first come first served basis. 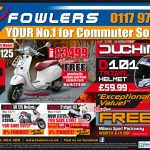 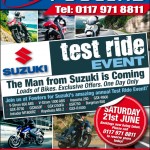 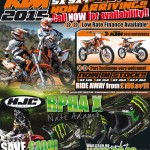 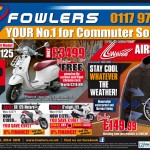 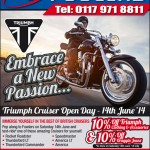 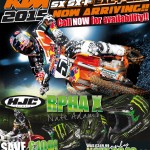 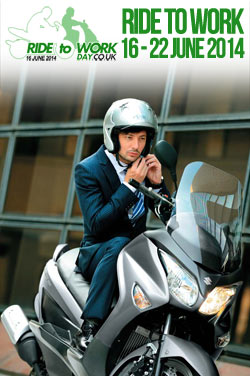 This year, Ride to Work Day kicks off Ride to Work Week, 16th-22nd June 2014. On Ride to Work Day, motorbike and scooter riders around the world show just how enjoyable their daily commute is. By riding to work we demonstrate that life would be better if more people rode motorcycles and scooters every day, with time savings, less congestion and reduced travel costs. Ride with us and commute happy!

Click here for more information about Ride to Work week